In 1996 at Youth With A Mission (YWAM) in Elm Springs, AR., Sean Orme, Jennifer Williams, Molly Bloy, and Tommy and Sonya Bitner gathered in a room and began to pray. We had all been on several outreaches and led outreaches to various countries with a focus on India. Tommy, Sonya, and their two children, Rikki and Brandon, had previously stayed in India four months ministering in a remote village and planting a church. In this small corner of a room, the prayer of these five adults began to center on a ministry in India based on the following verse we believe God put on our hearts: 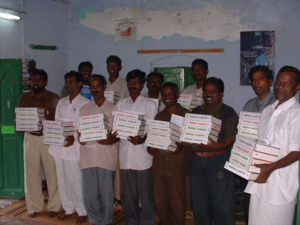 “To equip the saints for the work of ministry, for building up the body of Christ, until we all attain to the unity of the faith and of the knowledge of the Son of God, to mature manhood, to the measure of the stature of the fullness of Christ.” (Ephesians 4:12-13, ESV)

We feel God planted a seed at that time. We were not to be a church planting team in a foreign land, but to equip the Christians who were already there to have a greater influence in regions without a church or in areas not yet touched with the Gospel.

We began to sense Ephesians 4:12-13 taught that, “Equipping others is the most effectual way you can reach the nations.” We called ourselves the “Equip team for the Tamil speaking people of India.”

At the time of our prayers, we had already been talking with the leaders at Youth With A Mission in Chennai, South India. They had been assembling a national team of southern Indians trained at YWAM Chennai campuses.  Tommy had traveled to India a couple of times to meet with the leadership team and develop a six class modular school. Together, a key area was chosen in the Kanchipuram district of Tamil Nadu. The only requirement to attend the six course modular school was for each area pastor to bring two lay leaders with them to the course. Each participant would attend six different courses with eight weeks of homework between each class. During this time they would be laying the groundwork to plant a church. We also promised to send a team during their homework phase to follow up and help with any issues they might have during the process.

The participation of the pastors and lay leaders was amazing. They filled the classrooms.  They learned many things that they were able to take back to the surrounding villages. Their homework phase included evangelizing and meeting in homes for prayer, which would then become a small group and eventually a church. 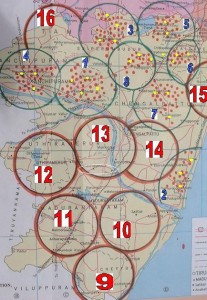 During the first group’s homework Phase 1, we started the module school in another area not far away. While some of us were teaching, others on the team would travel back to the previous area to follow up with the pastors and lay leaders we had just trained. (Yes, we were busy!) We continued this process until we had finished teaching all six modular courses in these six villages. We then moved to a different region and started the process over. We believe God moved on the hearts of many people, and over 300 Cell Group Churches were planted by these very hard working, and sometimes persecuted, pastors/lay leaders. 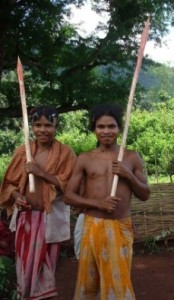 God equipped our team with finances to supply each of our national workers, pastors, and lay leaders with study Bibles in their own language. Additionally, we equipped everyone, in their own language, with a set of Bible Encyclopedias, Bibles for their disciples, and copies of all our teaching and evangelism materials. With this type of equipping of the saints, these godly men and women planted churches in southern Tamil Nadu faster than anyone could have ever dreamed. It was a move of God, not a move of man.

Finally, we want you to know that we - Tommy, Sonya, Rikki, and Brandon Bitner – truly lived in India, experiencing many aspects of “real life” during our season of ministry there. Brandon was baptized in the Indian Ocean. Tommy ministered in the dangerous mountains of Orissa. The Bitner children adopted a monkey as their pet; there was also a “jungle” dog that kept Brandon company. We got stuck in many traffic jams, witnessed suicides by fire, felt the effects of the anti-conversion law and the persecution that followed, and experienced a long list of highs and lows that daily life in India encompass. We know this area of India well.  If you have questions about outreach, we will usually know where to get the answers.

THE ADDITION OF STAN AND JUNE HINMAN: 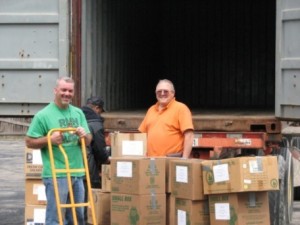 Stan & June Hinman and the Bitners came from the same home church in Concordia, Kansas. They were trusted friends in church and in ministry, and they had worked together with us from the beginning of the India project. Both of our families went through the Discipleship Training School and the School of Evangelism at YWAM in Elm Springs, Arkansas.  The Hinmans had worked with the Bitners in India and had also ministered in India on their own. Stan and June have a heart for children and for teaching the Word of God. This heart led them to link up with India Bible Literature (IBL) and their work in teaching, working with children, and distributing Bibles in India. We had purchased from IBL all of the materials that were given to the local pastors — God was working all things together.

The Hinmans became involved with India Bible Literature (IBL) and then began working on behalf of their literacy program in the USA. Stan Hinman, with his CPA and organizational skills, completed much work in setting up our mission organization for India. They continued to be an integral part of the India team through prayer, finances, and support raising. The Hinmans were helping to equip us to do the work of the ministry on the field!

Stan took care of the Bitners’ finances and stayed in constant contact with them during their three-year stay. They even came to see the Bitners. It was during this time Stan recognized the need to incorporate the India Equip Team into a tax-exempt organization which became Equip the Nations, Inc. in Arkansas. Once back in the USA, he applied for and received our 501(c)3 tax exempt status.

THE BIRTH OF EQUIP THE NATIONS:

The concept of Equip the Nations being incorporated and having a 501(c)3, set the stage for continuing the ministry in India after our return home. It allowed us to continue the work of equipping the nationals for the work of the ministry, even though we were now living in the USA.

THE HELP OF OTHERS:

We also need to give much credit to the many YWAM teams who came to India and did evangelistic outreaches in our areas. These outreaches blessed us (it is always good to be around people of similar culture) and blessed the national Indian pastors. Many people committed to follow Christ because of the foreign teams’ willingness to come and because of their continued support of the ministry after they left!

COMING HOME AND THE START OF NEW MINISTRIS IN INDIA: 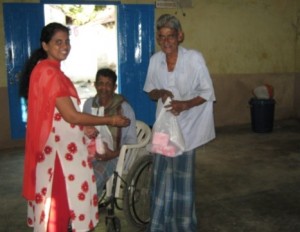 Since leaving India, our Indian team members have developed some amazing ministries. Some of the ministries that were birthed are the following: Module Schools; ministry to those affected by the Tsunami; outreach to rescue baby girls from infanticide; ministry to those suffering from leprosy and dying of HIV; and church planting ministries. The list of incredible ministries goes on and on. We are so blessed to be a part of supporting those ministries. Stan and June Hinman continue to gather used Bibles and send them to India for a literacy project. See http://www.usedbiblesforindia.org/.

During Tommy and Sonya’s time as missionaries in India, we raised all of our personal support and ministry support. Upon returning to Arkansas, we continued working to keep the financial support coming in and to talk with our supporters about continuing to support the projects they had helped to start.  With this income as a base, and together with others who have joined the Equip the Nations team, our ministry was on solid ground to continue as a 501(c)3. Stan oversees our accounting records with the help of a CPA firm.  Sonya handles all the daily bookkeeping, check writing, correspondence, funds distribution, and communication with the people on the field. She gathers the newsletters to share with people interested in this ministry.   She also prepares and mails receipts to donors. 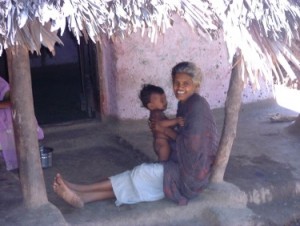 In addition to this brief synopsis of our history, the prayer of Equip the Nations is to find “friends of the ministry” who will join hands with the projects in India that have been included on this website.  These are all projects started by people we know and trust.  We call you “friend” because we want you to “befriend” them and to equip them with your insights and knowledge by communicating with them. Because of each of our experiences, we are more than a fundraising site. We are an “equipper-raising website”!   We desire to be about building relationships much more than finances.
The Equip the Nations Team